…and now let me introduce Mrs…. 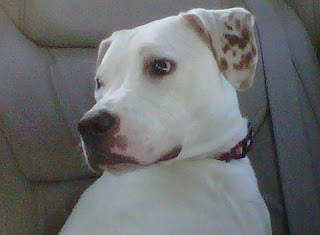 It’s with a heavy heart that I type this out as tomorrow afternoon we are surrendering our beloved pitbull mix Wilson back to the SPCA where we got him over eight months ago.

I’ll back up to 4 days ago when Liam and I were skipping around about our new Carriage home that we had moved into a mere 2 days prior. By chance we had found this amazing old carriage house on a 8 acre estate that was nestled into a crevice of the old main line along picturesque Sugartown Road. (Go to my Facebook pix to view our new digs)!

Our new landlords (the Estate owners) seemed like the perfect couple to have as new neighbors, she an artist and he a writer, an older couple who’s children were grown and in college, they had Ponies on the property, in addition to egg producing chickens, a flowing stream along their back property which was flanked by a pool and a fun and bouncy trampoline. Our own Club Med Countryside! Additionally, they also have a very cute and sweet Shebu-Enu pooch named Kobe; who is known to drag home dead foxes in his mouth; which he gladly disposes of on the front stoop!(which I have to surmise he’s caught). Needless to say we loved Kobe and his tail wagged happily at us when we drove up the long driveway to our new house. We knew we’d have to introduce Lucy and Wilson to Kobe soon after we moved in and Liam was successful in doing that two days later. Mind you, we had our dogs electric fenced, as is Kobe. However, Kobe has closer access to our area than we do to his – needless to say the electric fences were not a deterrent or a factor in the upcoming quarrel that would ensue.

On Monday afternoon, our dogwalker came over to walk our pups, and all went well. She walked them both through our yard to the other side of the neighborhood – an area we dubbed “The McMansions” I am sure I don’t need to further explain what kind of folk live over there? OK, here goes – for the two couples that we met, they are nouveau riche Main Line housewives who carry around their yappy little dogs in their Louis Vuitton handbags and shop and lunch during the day while their husbands are out making the real coin. There I said it. Those are also our new neighbors – oh joy!
Anyways..Susan, a/k/a dogwalker, came back with both dogs and decided that since it was such a nice day out and our dogs really love to run free that she’d let them run around a bit in of the horse corralls – that we were told by our new landlords our pups could run around in – hence, Lucy and Wilson started frollicking around….. when out of the blue, Kobe came strolling over to join them….all was good … for about 2 minutes….. Kobe and Lucy started scrapping and then Wilson pounced in (to protect his sister Lucy!) and fought and fought with Kobe like there was no tomorrow, and sadly, there almost wasn’t for Kobe. Apparently Wilson had his grip around Kobe’s neck so tight a few of the McMansion neighbors came running over to help and one of them had to smash Wilson with a large fence post stick to get him to let loose of Kobe. Of course this all happened so fast, that no one really knows exactly who started what, who’s bark was louder, and which dog should really be in the dog house. Of course having a pitbull mix doesn’t help our case, esp with the recent pitbull dog fighting ring that was busted in the City earlier this week!
End result; Kobe is lucky to be alive. The Vet said if Kobe didn’t have such a thick coat of fur or wasn’t wearing collar, he’d be dead for sure. Needless to say I received the frantic call at my office downtown only to have to call Liam to rush home and assess the damage. Major damage. Kobe needed to be rushed to his Vet, while Wilson had to be cleaned up and bathed to wash off all the blood and assess any damage on him. Wilson has a few minor cuts and scrapes on his head; nothing as bad as Kobe’s damage. Kobe had to stay overight at the Vet hospital and was released 16 hours later with a bag full of medication, tubes sticking out of his neck and a freshly shaved look.
Liam and I (and our dogwalker Susan) are paralyzed by this. We have spent the past couple days discussing, speaking, thinking and praying on what the right thing to do here is. Clearly, we can’t have anything like this happen again. We contemplated putting Wilson down, but that thought didn’t last too long; and in the end, for the sake of our new landlords and the McMansion neighbors, as well as Liam’s young girls and our own piece of mind, we decided its best that we take Wilson back to the SPCA we rescued him from. Only to realize that he needs to be rescued — again.
I personally wish we could keep him; but we feel our hands are tied. What if what if what if…keeps playing in our heads. If this freak attack had occurred at a dog park or elsewhere with strangers that were involved, then our decision may not have come to this. However, if we feel that we have to worry anytime Wilson is out of our sight and to maintain the respect of our new neighbors and landlord, then we feel we have to do the right thing and find Wilson a new home. We have been nerve wracked since this happened and even Lucy seems a little askew. I can’t even think of sweet tail wagging Wilson without getting emotional. He just wants to be loved and saved! Don’t we all?
Its back to the 3 of us….for now. Godspeed Wilson. xoxoxo