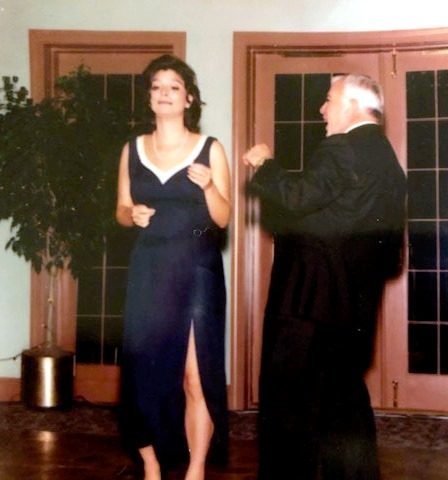 My Dad was my first love – the first man that I looked up to, the first man that I wanted to love me and the first man that did love me; wholeheartedly.  He was a good dad growing up and we never wanted for anything.  My Dad grew up poor in an Irish Catholic neighborhood in Brooklyn NY.  He was 100% Italian and was often mocked for not being welcomed for his heritage.  He told me a story recently about a girl he took out on a date when he was a teenager and her family was Irish.  Her father made my Dad wait on the corner as he didn’t want him to be near her home.  I had never heard the story, but it gave me perspective on how challenging it must have been for my dad to be Italian in a predominantly Irish neighborhood.  His early childhood friends were Irish and later when he joined the Marines, he became friends with a couple Italians and he maintained all those childhood friendships until he passed away. Being Italian was a big part of my Dad’s life and he wore it proudly; as he should.  We had the big Sunday dinners at our home and our Mother, who wasn’t Italian, learned how to cook Italian by her mother-in-law.  She became such a good cook, that Dad couldn’t tell if his Mom or Wife had cooked the meal!

My Dad lived the American Dream.  He started out with nothing, went to school and had the desire to do better for himself.  He was motivated and driven and with a strong work ethic, he started working at the age of eight.  Dad started out in insurance sales in his career and rose up quickly through the corporate ladder to the level of Vice President and President for certain insurance companies.  Not a fan of the corporate bureaucracy, he started his own Insurance agency, which my Brother joined right out of college and is still operating today.  Dad was a smart and shrewd businessman and knew how to get the best deal for his money.  You’d go to Dad when you wanted a car, a new piece of furniture or any other kind of appliance or machinery needed.  He always knew a guy, who knew a guy!  My Dad was the charmer, the man that walked into a room with a smile and a grin and others took notice.  He was witty with a great sense of humor and could always make others laugh, and he had an audible laugh that was infectious.

My Dad was very proud of me for getting sober.  He would call me a lot in my early sobriety and ask how I was doing and if I was still going to meetings.  He took an interest in my 12-step program and was so happy that I found sobriety.  For the last couple of years, I would call my Dad every Saturday morning on my way to my 7:30 am meeting – and he’d usually be driving to his garden co-op that he had in Florida.  He’d say to me, “Good morning Louie Lou (Louie was a nickname he gave me in 7th grade) how’s the weather? Are you having another beautiful California day?” I reply, and then he’d say, “Are you going to your meeting?”  Dad would often tell others I was in AA and when I tried to explain to him that it was an Anonymous program he’d say, “Well I don’t care; you don’t need to be anonymous with me”.  Through the years, Dad would come to visit me in San Diego when I took a token for my sobriety time. He’d accompany me to my meeting, and he always had a funny comment afterward.  “Are you sure all your pretty girlfriends are Alcoholics?” and “What do they do with all that money that gets collected? Do people skim?” and, “That’s a really great program, it’s a good deal for a dollar in a basket” and “How come I never see commercials or ads for them anywhere?”  This past October Dad came to visit me for a long weekend.  We got to do some of his favorite things, drive along the PCH, grab lunch to catch up, go for walks along the beach trail and have dinner at a beachside restaurant.  We also were able to visit one of those Irish friends that he grew up with; they’d been friends for over 60 years.  He and Uncle Jimmy were big Dodger fans, specifically when they started out in Brooklyn many years ago.  We were able to watch the longest game in World Series history and it was a memorable evening with a lot of laughs and grins.

Two days after Thanksgiving, I got a phone call from my sister that I needed to get on a plane to Florida, because Dad had suffered an aortic rupture and was being wheeled into emergency surgery.  A catastrophic event his Doctor called it.  They didn’t know if he’d make it through the night.  I made the first flight out to Lauderdale and an hour or so before my flight my step-mother called to tell me that Dad didn’t make it.  I still flew out to be with family and to see my Dad one last time.

Sitting here and writing this, I cry.  He was 78 and taken far too soon.  I think a part of me is still in shock and if I flip through the 5 stages of grief, I’m teetering on shock and denial, with a good twinge of anger also coming up.  I do have to believe that God played a huge part of my Dad coming to visit me a few weeks ago.  Dad never liked to fly to California, the flight was too long for him and wreaked havoc on his aching back.  But for whatever reason the day he called to tell me he booked a ticket, I was grateful.  I’m grateful for that visit, and I’m grateful for what he taught me through the years.  Dad taught me how to show up and persevere and to never give up.  Which is how I got sober, I never gave up and I kept showing up!  Dad was one of those really great Dad’s.  The kind that you see those Hallmark cards for.  He wasn’t traditional or conventional by most standards, but he was my Dad.  And that alone was good enough for me.

There’s a saying “Love the people God gave you because someday He will want them back”. Well, thank you God for lending my Dad to me for 51.5 years. He’s back home with you now.

*Picture was taken in 1992 at a close friend’s wedding – Dad liked to dance!