Learning how to self soothe in recovery

I wanted to repost what I shared last year when I attended the amazing #UniteforAddiction weekend in Washington DC.  This epic event brought thousands to our Nation’s Capitol to rally for addiction and how it needs to be at the forefront of our nation and how we need to recover out loud and end the stigma of addiciton.  I’m uber grateful that this is FINALLY a topic that is being discussed in mainstream politics and in America today….

A weekend in DC: a Rally , F2F meetings and Gratitude

I came to DC this weekend with no idea what to expect and to say that any or all of my expectations were surpassed – would be a huge understatement.  Forget the fact that this Floridian transplant was cold upon arrival and within hours had to flee to H&M for jacket, gloves and socks.  I definitely had some spiritual experiences – to say the least. Arriving earlier than planned on Friday evening, I was anticipating how it all would go down and as usual, God has other plans. No expectations with anything and that proved to serve me well.

Saturday early afternoon, I attended the FedUp Rally at the Washington Monument, where the mission was to create and showcase a voice to call for an end to the epidemic of addiction – attributed to opioids, heroin and other prescription drugs.  I sadly only stayed for only 30 minutes or so, because I’m a wimp and had to vamoose to get some warmer clothes.  However, attending this rally really drove home the fact that Heroin/Opioids is a BIG problem in our society.  Every 3 out of 4 Heroin addicts start out as pill addicts, a figure I find quite astonishing.  The amount of parents that were there with their child’s face on a poster was too many.  And even saying too many isn’t giving the real statistic its due justice.

Saturday at 4 pm brought me to the Argonaut Restaurant in DC, where Jake Parent had a panel to showcase his recently launched book, “Hearts and Scars:  10 Human Stories of Addiction”  http://www.amazon.com/Hearts-Scars-Human-Stories-Addiction-ebook.   Jake had an amazing panel that included fellow contributors,  Chris Aguirre of Klen &amp; Sober, www.sincerightnow.com, Kelly Fitzgerald www.thesobersenorita and  Nicola O’Hanlon, Editor in Chief of www.iloverecovery.com  – who came to this event all the way from Ireland!  The panel gave us additional insight into their stories and then Jake closed down the hour with some audience participation – a one minute rapid fire to share “Your Story” – it was great, smart and hilarious!

An hour or so after the panel, the who’s who of sober bloggers, (penned by Anna David) and then some, ascended upon us while the Argonaut served us some amazingly tasty dishes, friend macaroni and cheese balls seemed to be calling my name.  It was here that I was able to meet – in person-  the amazingly talented group of writers and bloggers; Anna David, Veronica Valli, Holly Whittaker, Laura McKowen, Laura Silverman, Magz Shores, Jo Black Sullivan and Jason Smith (I think that’s everyone?).  The evening continued on with a band and some Karaoke sung by our own Laura Silverman.

Sunday morning brought me to a 7:30 am SoulCycle experience with the hip Holly Whittaker and lovely Laura McKowen that left me breathless and fulfilled.  It was then onto breakfast with some cool sober folks and walking around DuPont Cirlce to do some more shopping, only to be followed by an amazing lunch at some great restaurant (that I can’t remember the name of) with some newer notable people and then lastly onward to the Rally.  Upon entering the Rally area, I was able to mill about at the booths and tables that were set up and visit with some of the fabulous folks from the prior evening.  As the excitement started to rise with the start of the concert at 4, I was able to hang with my partner in crime for the day, Anna David, and hunker down in the warm and cozy VIP area – which was an added bonus.  I was star struck with some of the sober celebs, but mainly surprised at how humble they all were.  No fan fare with them.  We are all just a bunch of drunks and addicts who are rallying for the same cause #endthestigma #unitingforaddiciton.

Being able to jam out and rock on with such notables as, Joe Walsh, Sheryl Crow and the Goo Goo Dolls – I was struck with the realization of how freakin awesome it is to be part of such an amazing movement.  I felt so blessed to be included in this Fellowship and even more grateful that I’m able to participate in my life today and see that recovery does work – as it was shown to me over the weekend.  And it also works for over 23 million Americans – some of which I’m glad decided to converge in DC this weekend.

The real camaraderie of being there with thousands of others uniting to end the stigma of addiction was historical – as well as momentous.  I’d like to say it was maybe even life changing and clearly I think all who attended the Rally knows just how that feels. 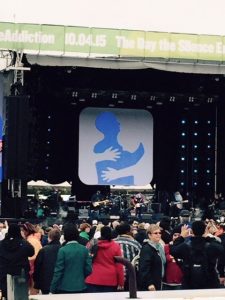